BEST WISHES -to all  Junior Certificate students  doing Class Room Based Assessments and Assessment Tasks. These tasks are a fundamental part of the new Junior Cycle for students.

Gallen CS Students  Council  is now up and running, giving students a democratic voice in the school and empowering them to be leaders within the school community. Student Council meetings are held fortnightly and provide students with a forum to articulate issues of concern to them. Mr. Mulhall is the teacher link with the Student Council.

Luz Corrigan, 6th Year was elected Chairperson and Meadbh Keenaghan, 1st Year as Secretary. Students have been active in promoting and raising awareness of the new initiative between ourselves and Sodexo to raise awareness of the importance of recycling our waste. We have a “Three Bin” initiative   recently incorporated into the school. Gallen CS through its student body is actively promoting wellbeing among its school community.

We welcomed sixth class students into Gallen CS on two days over the last two weeks to experience some of what it might be like for them as a student in first year. Between the teachers and the TYs assisting  the sixth class students from nine primary schools enjoyed the  experience and looking forward to our Open Night on January 22nd at 7p.m.

Under the guidance of Ms Bracken the school choir are in rehearsal for the annual Advent Carol Service in the Parish Church on Mon 17th. They went up to the Nursing Home to sing some Christmas songs to the elderly also last week. We also are looking forward to having them perform for the school on Friday 21st before the end of the school day.

Gallen CS students have been active on the sports fields in recent times and this past while has seen male and female teams compete with varying degrees of success.

Congratulations to our Junior Ladies Team who had a great victory over old rivals Heywood CS in the first round of the Championship in a match played in Mucklagh on Thursday last. The girls showed great determination and spirit to get their campaign off to a good start.  Their ability to get goals with clinical finishing saw them run out winners by 7-5 to 1-15 with Moya Guinan, Moya Ibbotson, Sarah Fitzgerald, Nicole Buckley and Emma Cahill prominent among the scorers. Thanks to Ms. Beatty and Mr. Folan for accompanying the team.

Last Wednesday our 1st Year girls participated in a very competitive schools blitz hosted by St Mary’s Edenderry. This team is backboned by the treble winning Naomh Ciaran u 14 ladies team and is a school team to take note of in the years to come. Thanks to Ms. Beattie and Mrs. Scully for their work here.

Congratulations to our Juvenile boy’s team led by Mr. Garry who beat Kilcormac VS   by 4 points to qualify for the semi-finals. This team showed great promise last year by reaching the final of the Leinster Schools 1st Year competition and hopes are high that they can continue their progress at North Leinster Juvenile level.

Gallen CS 4-9     Cnoc Mhuire Granard 3-13.Gallen were pipped by one point by old foes Cnoc Mhuire   Granard in this thriller played in Granard last week. In a rematch of last year’s North Leinster final where Gallen were victorious by a point, this time Granard came out on the right side of the score line. In a match dominated by the windy conditions, Gallen playing against the elements, trailed heavily at half time. To their credit, the Gallen lads had a great second half and rallied to close the deficit to one point by the finish with Gallen even having chances to snatch victory.In a closely contested group Gallen CS must defeat Boyne CS in their final group game to qualify for the North Leinster quarter final in January.

Our Junior footballers have found the going tough in a very competitive group against bigger schools. In their first game played in the Meath Centre of Excellence in Dunganny, Gallen were heavily defeated by a strong and physically powerful Boyne CS team who have ambitions to do well in this competition.

In our second match played in Ferbane last week   against Dunshaughlin CC, Gallen CS were competitive up to half time and needed to push on   in the second half but a second goal from Dunshaughlin dented our team’s belief and Dunshaughlin pulled away for a comfortable victory. We conclude our campaign with a match against Mercy Kilbeggan.

Congratulations to our Senior Team managed by Mr. O Neill, who qualified for the semi-final of the Connacht League by a comprehensive   31-7 victory over a strong Holy Rosary Mountbellew team in a match played in Ferbane on Wednesday last. Gallen showed great patience and a clinical touch to score five tries and set up a semi-final meeting with St Muiredeach’s Ballina. An extended run in the League is excellent preparation for the Cup competition starting in January. Gallen CS would like to go one better than last year by winning the League.

Hard luck to our Junior team managed by Mr. Mc Grath who lost by 5 points to a strong St Gerard’s Castlebar team in the semi-final of the Connacht Junior League. Gallen having defeated Oranmore , Ballygar , Mountbellew   and Garbally  in the League group stages went into the match with high hopes but came up against a strong Mayo side and were unlucky to go down.Nonetheless ,hopes are high for a good Cup run in January.

Gallen CS have played two  matches in this competition. In their first match they had a resounding 5-14 to 5-4 victory over Tullamore  College  before drawing their second match with Clara in a 4-17 to 4-17 thriller in Ferbane.

If they defeat Kilcormac in their final  group match they will qualify for the semi-final.  Thanks to Ms Kelly for managing the team.

BEST WISHES –Gallen CS sends best wishes to  the Ferbane – Belmont  players and management as they bid to make history by winning the u 21 hurling championship. They play the winners of Na Fianna / Ballinamere – Durrow  in the final. Ferbane – Belmont can complete the football – hurling double with victory.

The u 17  hurlers are also wished well in their final. 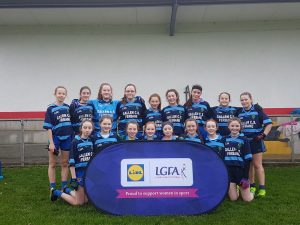