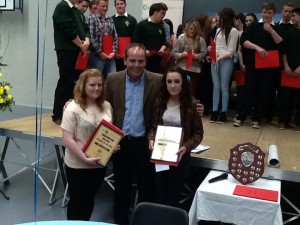 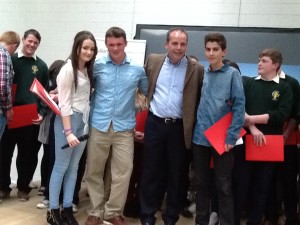 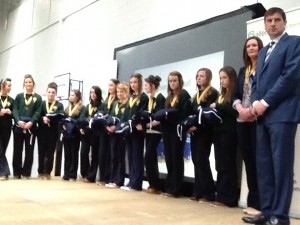 Gallen C.S.   honoured its sportsmen and sports women at a very enjoyable function held in the school on Friday night last.  Guests of    honour  for the  evening were  Padraig  Boland ,  a Ferbane  man and  current  Chairman of  the   Offaly County   Board and  Michael  Duignan ,  Offaly  hurling legend and  “Sunday  Game”  analyst.

It was then time to present individual awards,    Padraig Boland and Ms Alma Claffey formally presented Nikita   Dunican with   her   two silver medals. Nikita is  a member of the  South  Offaly  Special  Olympics  team and  recently  won    medals  in the  freestyle  and  backstroke  disciplines in the  Leinster  Swimming   championships  achieving personal  bests in  both  semi-final and final.  Well done Nikita.

Brian  Gilligan was a well deserving awards   recipient  in  recognition  of   playing for  the  Connacht   Development  and  Provincial  Schools  squad in the Rugby  interpros.  Well done Brian.  Keith  Hamilton an  Irish  International  kick boxer and present 6th year  student was  duly  recognised as were  Sharon  Mannion  , 6th year and a member of the  Offaly  Ladies  football team that won the  National  League  Division   4  title against  Roscommon recently. Louis Hofmeyr was given due recognition for representing   his club, province and country at cricket.

Laura Dolan was given well deserved recognition for her achievements in track and   field.  Mrs   Derval  Scully  commended Laura  and  her   father  Mr  John  Dolan  for  all their  dedication  and  hard work  in athletics which paid  off for  Laura  as she  won the  Javelin and  Hammer events at  the  South  Leinster’s  before winning the  Leinster  Javelin title and   placing 3rd in the   Hammer.  Laura now looks forward to the All Ireland’s on June 1st in Tullamore.  Best of luck Laura.

Jamie Darcy was also recognised for his achievements in winning swimming medals at   provincial level.

It  was then time to  honour  the  Senior  Gaelic  football team who  had retained their  Leinster  Senior  Vocational    Schools  title in 2012  but had  fallen short in their  bid  to  retain their  All Ireland  Crown.  Fran  Mulhall  thanked the  players and  coaches involved in  2011 and  2012 ,  congratulated this  years All Ireland winning Junior  team  and  their  coaches.  Fran had a  special  word  for  Mr  Ciaran   Doyle  manager of  the  Junior   Team  saying that  this years  All Ireland  win  was fitting reward  for  Ciaran  Doyle’s  years of  dedicated  and loyal service to  GAA in  Ferbane Schools.

Padraig  Boland  then spoke  and  referred to  the  good  work   being  done  at  School and  County  level to  promote   GAA.  He referred to the “total team performance” of Gallen CS   in the All Ireland   Junior Football final against Warrenpoint.  It was then time to honour our   Junior   Football”treble winning” heroes.  Mr  Ciaran  Doyle  spoke of  his  pride in the  team ,  how  they  had  played 15  matches this year .  Mr  Doyle  introduced  each  member of  the panel  in his own inimitable  style  and  each player was formally  presented with   their  All  Ireland medals and a  Gallen  CS  GAA  polo shirt.

Michael Duignan then spoke with great passion about the need to keep playing GAA. He said playing lots of matches was the   key and he praised Gallen CS in this regard.  Michael said that to succeed you had to have ambition, drive, discipline and   determination.  Words to the wise from an All-Ireland winner.

Mr  Frank  Kearns  ,  Chairperson Gallen  CS   Board of  Management  spoke  of  his  pride in the  school and added his  congratulations  to  everyone on their   sporting successes .A  wonderful  night concluded with the  customary  refreshments.

Thanks  are  due  to  a  number of  people   who  helped  make  the  night such a success ,  Mr  John  Irwin ,  Mrs  Patricia  Kelly,  Eddie  Nally  for  his  wonderful   DVD presentations of our  GAA   teams  ,  the  parents and  families,  our  honoured Special  Guests,   the   caterers  and  cleaning  /  maintenance  staff who all worked hard to make the  night a resounding success.

Gallen CS      recognised its Transition Year students in a special end of year awards ceremony last Friday night.  Mrs Finnegan spoke of the wonderful opportunities that Transition Year affords our students.  Mr  Dunican  head of  TY , in a witty and well received speech   brought  those present  through the  TY    Year and praised the  TY   for  being an excellent  grouping  full of  hard work  and initiative.. TY   Students  went  on retreat  to  Glendalough,  Killary Adventure  Centre,  Slieve  Blooms to  sample   outdoor  life! University of  Limerick  Open  Day,  Young  Scientist  Exhibition in the  RDS  [  where we were represented by Emma  Phelan and  Celine  Camon,  thanks to Science  teacher  Mrs  Hopkins for  her hard work   in preparation for the  RDS] and  Athlone  Scifest  where  Gallen  CS won the ” Best  Communicator” award.

In addition to  this , Gallen  CS  TY students  took  part in  Swimming ,   Self   Defence  and  First  Aid   modules [ where they got a Nationally  recognised  cert]].  Mrs O  Toole   deserves  great  praise as  Gallen  CS  TY  students did  a Photography  course  and won  7  prizes out of  13 at an exhibition with  Jose  Luis Rolga   the  overall winner. Students  became  teachers  as they  mentored  our  local  people  to  master  computer skills in ” Log on Learn”.  Congratulations  to  Mrs  Mc Grath and  her ” Build a  Bank” team  who  achieved a top 7 finish in the  National  finals. The visit of Colm “Gooch” Cooper to the school in conjunction with “Build a Bank” proved a hit.

There were over 200   Xmas Shoeboxes showing the humanitarian side of   TY.  Thanks  to  Ms  Aoife  Kelly  ,  Mrs   Derval  Scully  and  all those who  helped  make  the  100km  Gaisce  Cycle  such a  success and  to  Mrs o Toole  whose TY  Enterprise  Groups showed great innovation and  flair winning  3  awards.  Among the creations was a” universal   cleaning brush for a tractor”.

Our  TY  students  enjoyed their  work  placements and  a fitting end to  a wonderful  year was the  trip to  Barcelona,  home of    the  Sagrada  Familia, ,  Porte  Aventura  not to  mention  Messi ,  Xavi ,  Iniesta and the  Nou  Camp.

Mr  John  Irwin  presented each  student with their  TY  Certificate and  spoke of  how  TY  will  benefit  students as they  make the transition to  Leaving  Cert level..  Mr  Dunican presented  Chloe   Egan and  Rebecca  Buckley  with  TY  students  of  the  year  award.  Zoe Rooney, speaking on   behalf of TY students thanked Mr Dunican for his work with the TY   group.

School Concert : Thanks to everyone who made the School Concert  last Wednesday 22nd May such a success. There was a lovely eclectic mix of  singing both solo singers and in groups. There was recorders, fiddles and violins, guitars and piano pieces  player.  Ms Reynolds deserves our   thanks for her   work in the Music Department. She also thanked the sixth year music class for their contribution over the last six years for supporting her in  in building up the Music department in the school , the talent in sixth year is noteworthy and she wished all of them continued success in their music careers and in their lives.

Art Trip : Ms  Mc  Keogh  accompanied our 5th and 6th year art students to  the  Luan  Art  Gallery in Athlone on  Wednesday last.  It was an invaluable trip giving our students new insights which will assist them in their art appreciation module for the Leaving Cert.