Gallen CS qualified for their fourth Leinster Junior Vocational Schools A Final in 5 years by virtue of an eight point victory over old foes Carnew in this semi-final played on Friday last at a well-appointed Portarlington venue. Gallen now face Granard in a repeat of
last year’s final. Ferbane will be out to atone for their defeat in last year’s decider. Interestingly, Gallen beat Granard in the first group game of this year’s competition but the Gallen team and management are battle hardened and football savvy enough to know that past results do not guarantee future success! Indeed as this report   hits the shops the final victors will have
been decided as the final    took place yesterday [Tuesday December 18th in St Lomans Mullingar]. Gallen got off to a good start with a Michael Butler point before the electric Dean Hogan whose pace and skill tormented the Carnew rear-guard all day long, pointed to give Gallen a 0-2 to no score lead. Ryan Heavin then pointed and Gallen were three to the good, 9 minutes in. Carnew got on the score sheet through their hard working
midfielder before two excellent points one from play by Mikey Butler and one from a free by Colin Kenny made it 5 to 2 for GallenCS. Carnew then got their third point before Mikey scored again to make it 6 points to 3 for GallenCS. GallenCS then got a great boost when Dean Hogan crossed the ball soccer style across the goal mouth and Brian McEvoy palmed it into the net for a well worked goal leaving the score 1-6 to 0-3 after 20 min. Carnew hit back with 3 well worked points to leave 3 between the sides before Mikey rounded off the scoring with a point leaving the half time score GallenCS 1-7, Carnew 1-6.

SECOND HALF
Carnew really came back into the game in the first 5 min of the second period scoring a point from their No 8 Niall Hughes and a goal from a crisp shot low to the corner of the net by their no 12 Dillon Doyle. Teams level at 1-7 apiece, Game On! It was then that the GallenCS lads really showed their character. Ryan Heavin stepped up to the plate scoring 3 excellent points from play and all these scores were a product of his direct and dynamic running at the Carnew defence. Colin Kenny gave an excellent display in the second period scoring some crucial points as did Mikey Butler from frees and general play. Jack Egan was a rock solid leader at centre back and this inspired the GallenCS defence around him. GallenCS lads
dug deep into their reserves and raced into a 1-13 to 1-7 lead with 12 min to go. Kyle Higgins display in the second half was particularly noteworthy as was Brian McEvoy who had a very effective 60 minutes. Carnew tried hard but found GallenCS defence in defiant form led by
the excellent Anthony Seery. GallenCS tacked on five more points and Carnew replied with two points leaving the final score GallenCS 1-18, Carnew 1-10. GallenCS “Indian Sign” over Carnew continues and the Brosnasiders will be hoping for Santa’s early arrival with the Leinster Junior Vocational Schools Cup.

Last Tuesday Colin Kenny , Celine Camon and Joe Egan represented our school in the offaly Mental Health Public Speaking competition. Each took an aspect of the theme on mental health in the technological age. They spoke about how there needs to be a recognition that a lot of technological developments have greatly helped communication in our world but yet the personal one to one communication is vital for peoples mental health. The judges were very impressed with their speeches and they were delighted with their references to the agencies that are at present helping people with mental health problesm. Thanks to Ms Lenihan for her assistance  and guidance to the team. 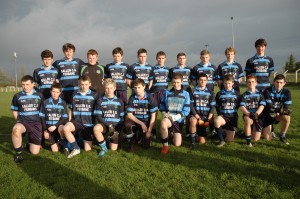