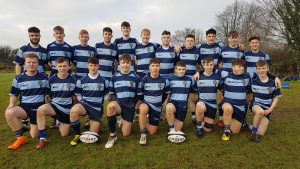 Mr. Micheal MacCartain is once again our Producer and Set Construction and Design and his multiple  talents will once again lead  to a  wonderful theatrical spectacle.

Mrs. Derval Scully  is our Choreographer bring her expertise to the role. Mrs. Evelyn Breen is Costumes Director with Ms. Josephine mc Keogh as  Director of Set Painting and Design with Ms. Heather Bracken  stepping into the role of Musical Director.

Mr. Sowerberry is played by Ffion Anderson and Mrs. Sowerberry  by Katie Moran.Jenny Darcy is Mrs Bedwin and Amber Poland is Widow Corney.

There will also be a Primary Schools matinee.

Tickets can be purchased and/booked  by ringing  Gallen CS.

SENIOR  RUGBY  Well done to our Senior Team who beat Headford 33-7 in the first round of the Connacht Senior Cup. Two tries from Cathal Flynn  and one try each from Harry Balsiger , Calvin Fox Keena and Ronan McDonagh saw the team power to victory. They play Athenry in the next match where victory would guarantee a semi-final spot.

Thanks to Mr o Neill for his work with the team.

SENIOR GAELIC Our Senior Gaelic Team bowed out at the quarter final stage of the  North Leinster B  competition to a strong Ashbourne CS team in a match played in Dunboyne last week on a score line of Ashbourne CS 1-18   Gallen CS  2-11.

Played with the aid of a strong breeze , Gallen helped by goals from Cathal Flynn  and Enda Coughlan led by six at half time and hopes were high of a win . Ashbourne taking full advantage of the wind stepped up their performance. The sides were level with ten minutes to go but Ashbourne hit five unanswered points to win by five.

JUNIOR HURLING Hard luck to our Junior Hurling Team who lost their  third group game to Kilcormac VS 2-12 to 1-4 and bow out of the North Leinster competition.

Thanks to Ms Kelly for her work with the team.

GOOD LUCK TO  Our Junior Rugby team in the Connacht Cup  against Headford and our Juvenile Football team in their North Leinster semi-final against Clonaslee VS and to our Ladies senior Rugby  squad who play their inaugural match v’s Ballinasloe next Wednesday in Ferbane.