Congratulations to TY   students John Corcoran and Ryan Heavin and  their  Science  teacher  Mrs   Catherine   Hopkins   who  did  the  school proud in the BT   Young  Scientist and  Technology  Exhibition   in the  RDS    last week.The title of Ryan and John’s project was “Social Media Sites and the Real World”. Ryan and John’s project was one of 550 projects selected nationwide out of 2000 projects submitted initially. Indeed Gallen  CS     can  be  proud that they  entered  8  projects  in total   so  the  ” appliance of  Science” is  happening in  Gallen  CS. Ryan and  John focused on how  Facebook  affects  our  lives  away  from the  Computer  Screen and  whether it  makes us  more lonely  or  more   Socially  Active. They compiled a survey and collected 221 responses.  The survey collected data regarding teenagers use of Facebook, time spent on Facebook and compared this to participation in and time spent playing sport. They also conducted a loneliness survey to identify a correlation between use of Facebook and loneliness.

Overall, their results showed that   girls spent more time on Facebook and less participation in sport. They also found that girls   had a greater experience of loneliness than the boys. A highlight  of  the  RDS  for Ryan and  John   was their  appearance  on  RTE  Six  One  News and  9  O   Clock   News  bulletins  on Thursday  last    where Ryan  spoke  eloquently  about  their project.  Well  done to  Ryan  ,  John  and  Mrs  Hopkins  who  deserve great  credit  for all their  hard work and  dedication.

Gallen  CS   under  the  expert  guidance of  coach  Ms  Josephine  Mc  Keogh qualified  for  their  first  All-Ireland   final  since 2003  by  virtue of  a  deserved win over old  rivals  St  Aloysius  Carrigtwohill in this tense semi-  final  played in  the  UL  Basketball  arena on Thursday  last. Gallen had  narrowly  beaten  Carrigtwohill  last  year  and this  encounter was  very  much in the  same  vein.St  Aloysius  scored the  first two   baskets but Gallen  CS  with  Emma  Maher ,  Eimear  Flynn ,  Roisin  Egan ,  Ellie  mc Evoy and Sarah  Kenny  starting  ,  gradually  came  back into  the  game.  Emma  scored Gallen’s  first  basket  before  further  baskets  from  Ellie and  Sarah  saw   Gallen lead 6-4  at the  end of the  first  quarter.In  the   second  quarter Ellie  got  Gallen off to  a  fine  start with a  hard earned rebound and  a  basket. Roisin  Egan  began to  stamp  her authority on the  game and was  beginning to  cause the  Cork  girls  problems. Roisin got 3 baskets at this key phase of the game.Anna  Grehan was then introduced and  made her presence felt and  showed  her determination on the  court .Eimear  Flynn and  Ellie  mc  Evoy  finished the  half with a  basket each to  leave  Gallen ahead 18-12 at  half time.In the  3rd  quarter Roisin Egan ,  Sarah  Kenny ,  Emma  Maher and  Ellie  mc  Evoy got baskets to  extend  Gallen’s  lead.  .In the last quarter   Gallen defended doggedly in their absence.  Roisin and Ellie   were then both fouled out and Kaithlin Rigney and Laura Devery worked hard to keep pressure on the   St Aloysius girls. Gallen’s  brave defence  saw them hold on for a well  merited win  on a 28-24  score line and  qualify  for  an  All-Ireland  final  appearance against St  Joseph’s   Charlestown       on  Thursday  January  23  in the  National  Basketball  Arena in  Tallaght at 1.30 pm 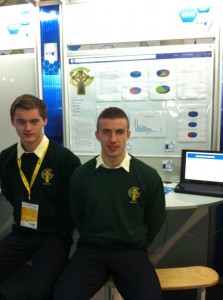