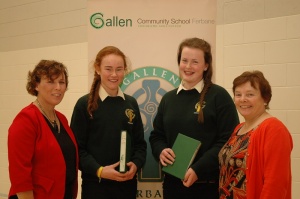 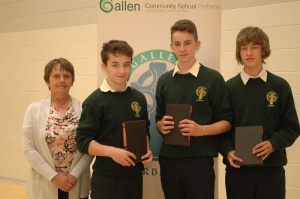 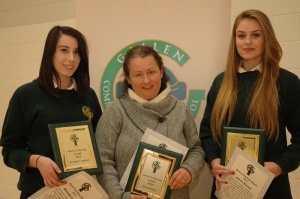 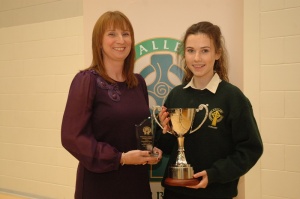 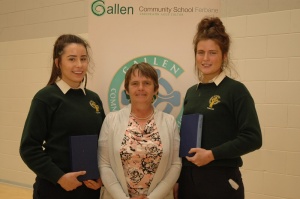 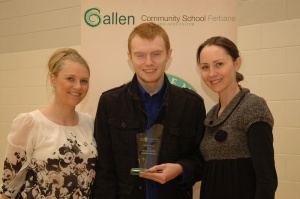 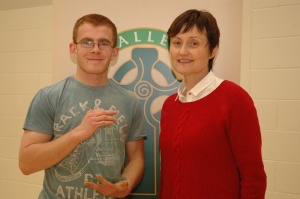 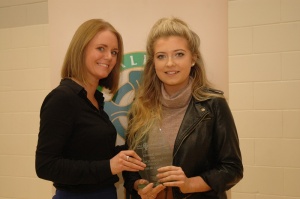 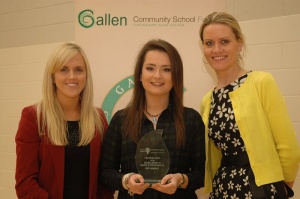 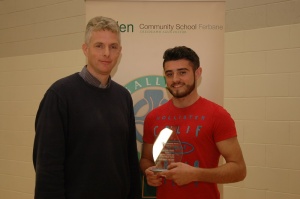 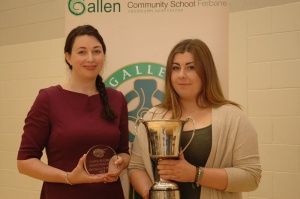 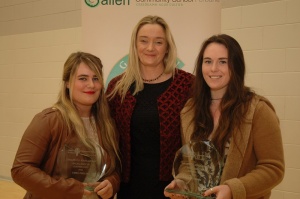 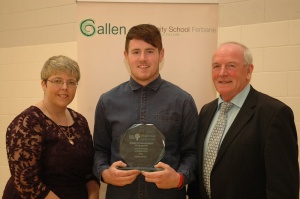 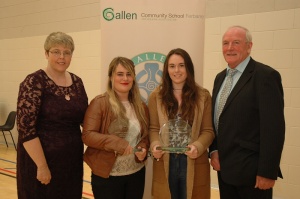 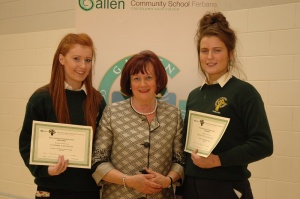 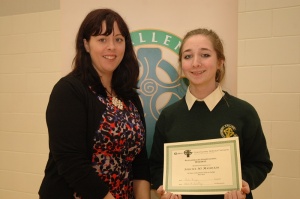 Gallen C.S.  held its annual Academic Awards Ceremony in the school on Friday 23rd of October last.  The ceremony   recognised   those students both past and present   who have excelled in the academic sphere. Guests of Honour on the day were Ms. Ann Beirne of Ferbane Credit Union, Ms. Michelle Sugrue, Mr. Kevin Gavin Chairperson Gallen CS Board of Management, Mrs.  Mary McLoughlin BOM, Mrs. Geraldine Keena, Chairperson Gallen CS Parents Association and Mrs. Mary Dunican Gallen CS Parents Association.Mrs.  Finnegan   welcomed  all present and in her introductory speech she referred to the fact that  students don’t stumble into academic excellence  by accident that  it’s all about  diligence , dedication and sacrifice.

The  First  Year  Awards with  the criteria being   best   results in 7 subjects in Summer  Tests  2015  went to  Claire Kenny [  St  Patricks]  and  Kate  Kenny [ St  Brigid’s]. The girls were presented with their beautifully inscribed book replete with citations   by Mrs. Mary Dunican and Mrs. Aideen Jordan.

The  Second  Year  Awards  with the  criteria being   best results in  7  subjects at  Higher  Level in Summer Tests 2015 went to Thomas Kerr [ St  Manchans]  and  Colin Wren  and Enda Coughlan [ St  Diarmuids].  The students were presented with beautifully inscribed books with citations by Mrs. Geraldine Keena and Mrs.  Frances Scully Deputy Principal.

Mrs Finnegan thanked the CEO of Laois Offaly ETB, Joe Cunningham for his sponsorship of two awards which students have already benefitted from. Certificates were presented on the day to acknowledge this sponsorship. The Laois Offaly ETB Gaeltacht   Scholarship went   to Roisin Egan and Caoimhe Kenny.  Mrs Noreen Sheehan, Head of the Irish Department read the citation as Gaeilge and the   certificate was presented by Mrs.  Mary McLoughlin.The  Laois  Offaly  ETB  Euro  Language Scholarship   went to  Therese  Cosgrove and  Ellee Mc Evoy with the  certificate  being   presented by  Mrs. Mary McLoughlin.

Moving on to Senior cycle the  Fifth  Year  Winners based on the based results in their summer tests last Maywere Roisin Egan and  Ellee Mc Evoy  with the awards  presented by  Mrs  Geraldine  Keena.

A  Leaving Certificate Gold Award went to Tommy Molloy for his hard work, tenacious spirit and dedication in doing his best. Tommy was presented with his award by Mrs.  Alma Killian and Mrs.  Fidelma Dermody two teachers working in the Cluny Centre.

The Leaving Certificate Excellence in Ag Science and Biology went   to Liam Cooper for his hard work, application and in depth knowledge of the subject. Ms .Anne Marie Brennan and Ms.  Noirin Buckley, his teachers presented Liam with his award.

The Leaving Certificate Excellence in Biology Award for her in depth knowledge of the subject went to Chloe Cahill. Chloe was presented with her award by Ms. Noirin Buckley. Chloe is now studying in the University of Coleraine.

The Leaving Certificate Excellence in Music and Geography went to Zoe Rooney for her all round excellence in these subjects. Zoe was presented with her award by Ms. Deborah Reynolds [Head of Music Department] and Ms.  Aoife Kelly of the Geography Department. Zoe is studying Music this year in UCC.

The  Leaving Certificate Excellence in  Construction  Award  for  his  knowledge   and craftsmanship went  to  Anthony Seery  with  Mr .  Micheál MacCartain   presenting Anthony with his award.

The  John Sugrue Memorial  Cup  for  Art with the  award  based on best  Leaving Certificate result and imagination  , skill , creativity , willingness to learn and   participation in  class went to  Faye  Keenaghan. Faye was presented with the cup by Ms.  Michelle Sugrue.  Ms Sugrue spoke warmly of her brother John and family memories of second level education in Ferbane. Mrs Finnegan thanked the Sugrue    family for their dedication, generosity and commitment to our school.

The  Gallen Community  School Scholarship   with the  criteria  being  those students who received over  500 points in Leaving  Certificate 2015 went to  Celine  Cimon and Emma  Phelan.  Both girls are great ambassadors for our School and were presented with a trophy and   scholarship by Mrs.  Ursula Finnegan. Celine is studying in UCD and Emma is studying in NUI Maynooth. The Board of Management Scholarship and Trophy was then presented to the student who received outstanding Leaving Certificate results. At 570 points in his Leaving Certificate, Colin Kenny was the recipient of this award. Colin is now studying Human Nutrition and Dietetics and is a worthy winner of this award for his dedication to excellence. The award was presented by  Mr. Kevin Gavin and  Mrs Finnegan.

With the awards   ceremony   concluded ,  Mr.  Kevin Gavin  addressed all present. Mr  Gavin   spoke about the power of positive  thinking  citing  attitude , skill and knowledge as  the  three  key factors in developing a successful winning mentality.  Success   is  strictly up to you  Mr  Gavin reminded the audience.

Mrs   Scully  , Deputy  Principal in  the concluding  address  thanked all  those who worked hard to  make the Academic Awards  such a success. She thanked the Guests of  Honour  ,  Mrs  Finnegan ,  staff , parents , students  past and present and  the  caretaking staff for  having the   presentation area in immaculate  condition. She  thanked  Mrs  Evelyn  Breen in sourcing  all the awards  with great  diligence and  the  students with Ms  Reynolds who provided the entertainment before the ceremony. A wonderful  afternoon concluded with the  customary refreshments.