Member of the Parents Association were happy to stay on as members with new parent representatives been bought in for Ballycumber and Cloghan and parents of new first years were also invited to join the PA.

Meetings were held in Classroom 1 in the school.  There were four Parent Associations meeting held during the 2017/2018 academic year and there was excellent discussion and contributions from all members. Arlene Guinan continued as secretary Geraldine Keena was elected chairperson.

In late September, Geraldine Kenna addressed parents of first years at a meeting and spoke about the role of the Parents Association and how they as parents/guardians can assist their son/daughter in school.

There was a workshop held for all parents/guardians from ZEEKO, based in UCD on how to become more knowledgeable about new internet technologies and ensure their children as safe using the internet. It was a very informative and thought-provoking meeting and well attended. It was agreed later in the year that perhaps Pat McKenna from Childwatch should be contacted for 2018 /19 to address all students again.

The following are some of the range of topics discussed at meetings and worked on over the year by the Parents Association.

The following were the activities that the parent’s association got involved in during the year:

2015/2016 was a very active year for the Parents Association in Gallen CS. We had a new committee elected for a 2 year term and our meetings were held in Classroom 1 in the school.  There were five Parent Associations meeting held during the 2015/2016 academic year and there was excellent discussion and contributions from all members. Rosemarie McLynn was appointed secretary and Geraldine Keena was elected chairperson.

One of the highlights of the year was being asked to host the PACCS conference on April 16th which the Parents Association were delighted to do so.  Members of PACCS addressed one of our meetings in October to explain the work of PACCS and to encourage parents to be active in their own Parents Association. Two members of Gallen CS Parents Association attended a planning meeting in Dublin also. The PACCS conference was a very informative day with good workshops on helping students with SEN, positive mental health and parenting. We were presented with a pull up banner from ACCS on the day which we can use for our own school functions.

The following are some of the range of topics discussed at meetings and worked on over the year by the Parents Association.

The following were the activities that the parents association got involved in during the year:

On May 10th Mrs Betty McLoughlin , President of the Institute of Guidance Counsellors was invited to the school by the Parents Association and gave a brief overview of some of the key issues facing young people before an Open Forum where parents were able to ask any question they wished about  guidance related issues. Questions included ones on first year taster programme, subject options in fifth year , advice on Transition year and work experience, alternative routes to college  , College application and deferral procedures, , apprenticeship training etc. There was a very good turn our for this meeting and parents leaving said it was one of the best speakers we had ever brought to GallenCS . Geraldine Keena, Chairperson of Gallen CS gave Betty a small token of their appreciation. 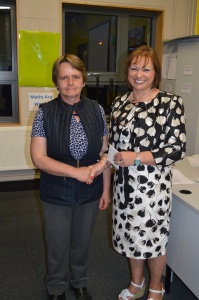 Mrs Finnegan welcomed everyone to Gallen CS and briefly spoke about the importance of parental involvement in their child’s education and school.  Dave Fitzpatrick then welcomed everybody and gave an overview of the day. He introduced Gareth Noble , solicitor who is head of KOD Lyons Children’s department. Gareth is recognised as one of Ireland’s leading litigators in the area of children with disabilities. He has successfully represented many families in challenging the law in respect of Domiciliary Care Allowances, Carer’s Allowance and services for children. Gareth also acts in Education Law cases for children and families in respect of school bullying, disciplinary issues and other educational law entitlements. He has also provided advice to educational institutions on policy formation and implementation. In his talk he  spoke about the challenges that schools and parents face with regard to ensuring students especially students with special education needs have in gaining full access to their rights under the Education Act , EPSEN Act  etc.

After break time the AGM was held which saw the election of new members on to the executive and the election of the  new president Rebecca Hemeryck. Workshops were then held which included “Dads for Dads “, a workshop on dealing with Stress and one on Assistive Technology.

After lunch parents got the opportunity to do another workshop before the Open Forum which had the following people to answer questions from the audience: John Irwin ACCS, Aideen Farrell SEC, Diarmuid de Paor ASTI, Annette Dolan TUI,  Betty McLaughlin, President of Institute of Guidance Counsellors .

Gallen CS Parents Association and Mrs Finnegan ,principal were delighted  to host the PACCS conference as the  first school in 15 years to do so and it gave our own parents the opportunity to hear from some excellent speakers and  attend the workshops. A special thanks to our  parents association members who helped on the day and to those parents who attended.

Photos of the day were taken by TY student Max Feehan and can be viewed in GALLERY section of website.

Following an invitation from Gallen Community School, Ferbane, to attend our Parents’ association meeting on 1st December, 2015, PACCS President Dave Fitzpatrick and Honorary Sec. Connie Carolan travelled to the school.Dave and Connie were introduced to the parents by John Irwan, Assistant General Secretary, ACCS. Dave thanked the Principal, Ursula Finnegan and parents for the invitation to Gallen C.S. Ferbane. He addressed the parents in which he gave an outline of his involvement in his own parents’ association, Board of Management, PACCS and NPCpp to date. He told the parents of his first meetings at his local parents’ association and how he felt that he had nothing to add to their deliberations but as time went on he had ‘found his voice’. He went on to list some of the activities in which his P.A. are involved – Book Rental, Debs Nights, Awards Nights and parents’ evenings.

Conference 2016 was discussed. PACCS had planned to return to holding the event in schools as it had been done in the early years of the Association. The outline of the Conference Timetable was discussed.In the years, 2012, 2013 and 2014 it had been held in conjunction with the NPCpp Conference but due to time constraints on the agenda, it was decided that adequate time could not be given to this important event in the PACCS Calendar. Therefore, it was felt that the change was necessary and last year it was moved to a stand-alone event and held in Bessborough Centre in Cork. Since Gallen Community School have all the facilities to host this event we are happy to do so. It was agreed that it would be the perfect venue for Conference. Dave thanked us for inviting PACCS to hold Conference 2016 on 16th April next. The meeting concluded. The Principal, Ursula Finnegan, gave the ‘visitors’ a tour of the school. [Geraldine Keena, Chairperson, Gallen C.S Parents Association] 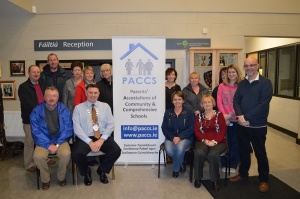 Two meetings were held in this term , October and December and there was a good attendance at both meetings . The following officer  were elected:

At our January meeting on 12th January, parents expressed appreciation at the way the recent flooding was handled by Sodexo and school management but urged Mrs Finnegan to continue to find out who will take ownership of the river bank and how it can be made safe for students if used in emergency exits and also about a retainer wall for the river.  Also discussed was school events, upcoming PACCS meeting  and two parents took a copy of our Learning Support Policy to review for us

The Internet is a terrific learning tool when used correctly and appropriately. However we also know that students are underperforming due to the long hours they spend online and their sleep and concentration patterns are being greatly disturbed by staying on Facebook and other social media through the night. This is leading directly to students of all ages underperforming at school.  iKydz is a revolutionary simple tool that gives parents control over the internet usage at home .

iKydz is so simple, you just plug our tamper proof smart box into the back of the home router and it does the rest. Each device in the home can then be controlled from your mobile phone. We call it the remote control for the Internet and we’ve even added a ‘mealtime’ button that can switch off all devices in the home during mealtimes, putting conversation back on the menu. We’ve also made iKydz affordable with a one off payment of just €99.

iKydz was created for three great reasons. 1.  To stop kids accessing the Internet when they should be studying 2.   To control what sites they go to – adult, gambling etc. sites can be blocked automatically 3. To stop them staying awake on phones when they should be sleeping.

Full information is available on www.ikydz.com  or contact John Molloy at john.molloy@ikydz.com

Thanks to all the parents who voted in our elections in May 2015 to elect a new parents association for Gallen Community School. These parents will serve for  two years and will offer their contributions and opinions on many aspects of school life. Thanks also for your nominations for parent representatives on our Board of Management  which takes up responsibility from August 2015. Eunan Healy and Geraldine Keena are your elected  nominees  on our Board of Management

There were five Parent Associations meeting held during the 2014/2015 academic year. Margaret Healy agreed to continue to act as secretary and Aidan Egan was elected chairperson.

The following are some of the range of topics discussed over the year at our meetings:

The following were the activities that the parents association got involved in during the year:

The National Parents’ Council Post Primary in conjunction with the NCCA, will host Information evenings nationwide for parents on the upcoming changes to the Junior Cycle. These evenings are open to  all parents, guardians and parent association members to attend. These events are free to attend and light refreshments will be available on arrival. If you would like to join us, please email information@npcpp.ie to register. Also on the night, NPCpp will give a brief outline about their work since 2003 (10 year plan) and future strategies.

Many years have passed since the foundation of the National Parents Council Post-primary (NPCpp) whose aim was to give parents a voice. NPCpp has worked for the involvement of parents in the education of their own child/children and to give parents a partnership in the broader education system. There were many years of struggling before the implementation of the Education Act 1998 which has given parents the statutory right to participation in the Education System.

On Friday 20th April we were delighted to welcome Shane Martin, psychologist and speaker to our school.

Shane is a psychologist dedicated to teaching people to empower themselves to enhance the quality of their lives.While most of Psychology looks at disorders and unwellness, Shanes no nonsense approach looks at investing in the strategies that are scientifically proven to enhance health and increase happiness. Shane spoke to both Sixth and Third years groups during the day and the students found him wonderfully uplifting “motivational, funny, fantastic, great, best speaker ever in school, brilliant” were some of the comments from students after the talk.

We had a good crowd of parents and members of the local community for Shanes talk on Fridaty night. For two hours he explained his ten startegies for wellness and happiness in a very entertaining and informative way. Shane gave us permission to post his slides on our website which we will do later this week.

For more information on Shane Martin please check out www.moodwatchers.com