Eoin won second in the Junior Individual Technology section and also won for Research and Innovation in the Built Environment .

Congratulations to Eoin Sheridan in second year who represented our school in the BT Young Scientist last week. Eoins project involved the design, construction and operation of a device that collects samples from a solar thermal collector system and displays it to the user on an Android app.
A solar thermal collector is a panel which converts solar radiation (sunlight) into thermal energy. It is very efficient and can last up to 20 years.
Eoin created this project not only to allow people to monitor their solar collectors, but also to show people how efficient and self-sustainable renewable energy is.

A past student of St Ciarans primary school , Clonmacnoise  and now in second year in Gallen C.S Eoin is a very intelligent young man who has put in long hours of research and work on this project. He was only one of three projects from Offaly to be chosen for the competition and the only winner from Co.Offaly.  During the judging and the exhibition Eoin explained his project many times to the judges and all who passed by his stand . He spoke confidently and clearly about his work and he is an excellent representative of all that is best in young people. Well done Eoin from all in Gallen C.S. 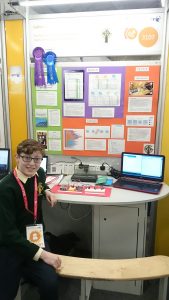 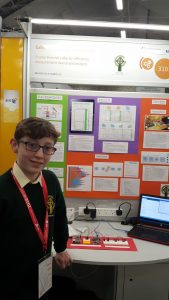 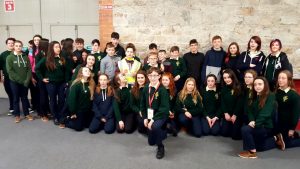